Cloud computing is Information technology paradigm that enables ubiquitous access to shared pools of configurable system resources and higher-level services that can be rapidly provisioned with minimal management effort, often over the Internet. It relies on sharing the resources to achieve coherence.  Third-Party cloud enables the organization to focus on their core business instead of expending resource on computer. Cloud storage is the newer technology which keeps our photos, videos, other documents, personal files safe and secure.

The term cloud computing is like a white paper internet-based technology. This terminology was determined for when the application and services moved to internet,” cloud”. Cloud Computing is not something that suddenly appeared overnight in some form it may trace back to time when computer system remotely shared resources, information, data’s. More currently though ,  cloud computing refers different types of services and applications being delivered in the Internet cloud, fact that the devices used the services and application don’t require any special applications.

The following shows the possible benefits for those who offers the cloud services and application.

The most essential features over the cloud storage are as follows

As per the cloud storage there are quite much advantages

CLOUD-BACKUP initially describes as the online backup. is the method of backing iup valuable files and folders .as it has internet secure it can be shared within a network and beyond the network with help of Internet.  There are many cloud provider for backup purposes and for file sharing purposes.

OneDrive (previously SkyDrive, Windows Live SkyDrive, and Windows Live Folders) is a file-hosting servies  operated by Microsoft as part of its suite of online services. It allows users to store files as well as other personal data like windows settings or Bitlocker recovery keys in the cloud Files can be synced to a PC and accessed from a web browser or a mobile device, as well as shared publicly or with specific people.

Google Drive is a file storage and synchronization services developed byGoogle. Launched on April 24, 2012, Google Drive allows users to store files on their servers, synchronize files across devices, and shares files. In addition to a website, Google Drive offers apps with offline capabilities for Windows and MAC OS computers, and Android and iOS  smartphones and tablets. Google Drive encompasses Google Docs ,Sheets and slides , an office suite that permits collaborative editing of documents, spreadsheets, presentations, drawings, forms, and more. Files created and edited through the office suite are saved in Google Drive.

iCloud is a cloud storage and cloud computing  service from Apple.Inc launched on October 12, 2011. As of February 2016, the service had 782 million users. The service provides its users with means to store data such as documents, photos, and music on remote sever for download to iOS, Andorid & Windows devices, to share and send data to other users, and to manage their Apple devices if lost or stolen. The service also provides the means to wirelessly back up iOS devices directly to iCloud, instead of being reliant on manual backups to a host Mac or Windows computer using iTunes. Service users are also able to share photos, music, and games instantly by linking accounts via  AirDrops wireless. It replaced Apples Mobileup service ,acting as a data syncing center for email, contacts, calendars, bookmarks, notes, reminders (to-do lists), iWork documents, photos and other data. One of Apple’s iCloud data centers is locatedin Maiden. Calorina, US.

Cloud Drive and the Files app  –  With iCloud Drive, you can securely store all your files in iCloud and access them from your iPhone or iPad in the new Files app, from your Mac, from a PC or on iCloud.com.

iCloud Backup and Restore  –  iCloud backs up your iOS devices each night when they’re connected to power and Wi-Fi, so you can easily restore all your information. And when you get a new device, restore from iCloud so you won’t lose a beat.

Dropbox is a file sharing services. operated by American company Dropbox, Inc., headquartered in San Fransisco., California, that offerscloud storage , file synchronization , personal cloud, and client software. Dropbox was founded in 2007, by MIT studentsDrew Houston and Arsh Ferdowsi, as a startup company, with initial funding fromseed accelerator Y combinatory. Dropbox creates a special folder on the user’s computer, the contents of which are then synchronized to Dropbox’s servers and to other computers and devices that the user has installed Dropbox on, keeping the same files up-to-date on all devices. Dropbox uses a freemium business model, where users are offered a free account with a set storage size, with paid subscriptions available that offer more capacity and additional features. Dropbox Basic users are given 2 gigabytes of free storage space. Dropbox Plus users are given 1 terabytes of storage space, as well as additional features, including advanced sharing controls, remote wipe, and an optional Extended Version History add-on. Dropbox offers computer apps for Microsoft Windows, Apple MACOS, and Linux computers, and mobile apps for iOS, Android and Windows phones  smartphones and tablets. In March 2013, the company acquired Mailbox, a popular email app, and in April 2014, the company introduced Dropbox Carousel, a photo and video gallery app. Both Mailbox and Carousel were shut down in December 2015, with key features from both apps implemented into the regular Dropbox service. In October 2015, it officially announce Dropbox papers its collaboratives document editor, in a reported effort to expand its operations towards businesses. As of March 2016, Dropbox has 500 million users. 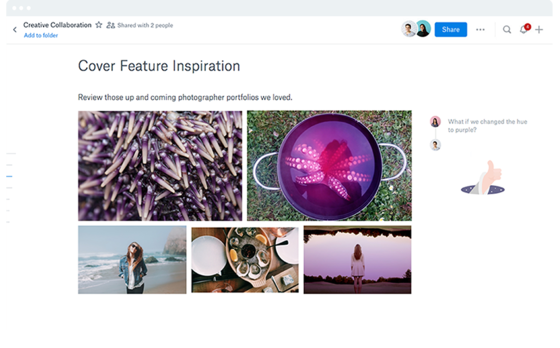